The man who chases James Bond

How did you get the idea to search for people with the name James Bond and make a documentary of it?

- The idea for the film came to me one day and just wouldn't go away. I've been a life long James Bond fan and my previous film "Not Larry David" had been about a lonely man in Singapore who impersonates Seinfeld creator Larry David at the Singapore Television Awards in a bid to win friends. This felt like a natural extension of that concept.

How wide was your search for James Bonds? How many countries did you manage to go through?

- I was at first interested in producing a Youtube video about a real person called James Bond experiencing the release of "Skyfall". Most of my recent work has been in viral videos through my company Mindboggler, who produces standard Youtube video content like webcasts and market updates for insurance and financial companies, as well as viral content for Microsoft Australia. So one night I jumped on Facebook, Google and Linkedin one evening and contacted hundreds of real James Bond's from around the world.

- Obviously this is a challenge, you wouldn't believe the number of fake James Bond accounts there are on Facebook and Linkedin, people who for god-knows-what reason have decided to make a James Bond account with Daniel Craig as the profile pic, listing Mi6 as their employer etc. Whoever they are they made the job a lot harder! So the strategy on Facebook became to search their friends list, and those who had another Bond in it were determined to be real James Bond's. One of our Bond's in Denver actually changed his name to James Bond but because his wife was therefore also a Bond he was determined to be a real Bond regardless. And thank God, they turned out to have one of the most amazing stories - how does life hit a point where its a good idea to change your name to James Bond? Why? You'll have to see the film to find out.

- Obviously this meant it was somewhat country specific, there are more James Bond's in the UK, Australia and Europe than in say France or China. The most amazing find was the Guyana James Bond who was found on Google in an article about him being shot by the local police forces in his country. My jaw dropped at that point and I realised this could be far more than I first envisioned, that these men could have truly amazing stories to tell. That James Bond took months to contact, and after numerous failed attempts a reporter in Georgetown wrote back to me with a phone number. I called it and got the voicemail which, no joke, said "you've reached Bond...James Bond...please leave a message after the tone". I think that was the giddiest and most surreal moment of pre-production.

- But back to those hundreds of email's sent on that first night. The next morning I awoke to find my inboxes flooded with messages from James Bond, James Bond, James Bond and so on. Bond's who had a litany of Seinfeld-ian nightmares to share about the day-to-day life of being James Bond from airport security to nosey waiters to being banned by Facebook and impossible to find on Google. Bond's who had enjoyed and taken advantage of the name. And most importantly men who had experienced crazy adventures more befitting of their famous alter ego. 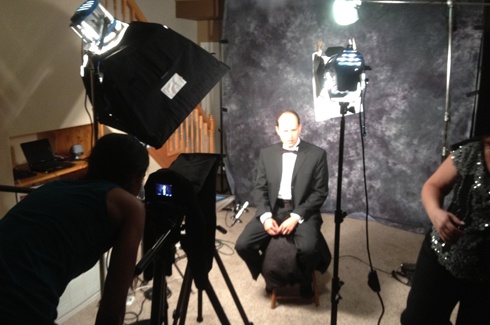 Director of Photography lines up the interview shot of James Bond in Denver, Colorado.

Having the name James Bond, is that a blessing or a curse?

- It's funny you use that term "blessing or a curse" because it is a phrase that every single James Bond mentioned at some point in the extensive interviews we filmed with them. It is certainly the conflict of the film and the conflict within their own lives. For all of them it is a blessing and a curse, and for some it overall leans to blessing and for others definitely to curse. One of the Bond's has the most amazing series of bad luck stories involving authority figures with weapons. In a US Homeland Security building he was held at gunpoint after the guards throught he was being a smartass and screamed at him "and my name's Donald fucking Duck - get on the ground!'. Months later the same thing happened after he was pulled over by the police for speeding, the officer ended up pulling him through the windshield and said "you fucked with the wrong guy on the wrong day!". It doesn't help that this James Bond also is in fact a complete smartass, but his name really is James Bond.

- Perhaps the most intriguing for me is our New York James Bond who is both the one who claims to hate the name the most but also the one who has perhaps had the most positive experiences from it. You can hear his amazing "mission impossible" speech at the end of our teaser trailer, and he is almost the narrator of the film. He calls it the bane of his existence but because he is the first James Bond (his middle name is Alexander) in the New York phone book whenever somebody in the USA is searching for a real James Bond he is the one who gets the first phonecall. He has done numerous TV commercials, magazine articles, he's been on David Letterman for being James Bond. But it all turns in on itself for him, as a theatre director by trade he is of course accused of being a 'fake' James Bond and using it as a stage name - which it actually isn't. The Other Fellow is yet another turn in his amazing relationship with the 'other' James Bond.

You have made one of three Bond movies in 2012 (Skyfall and Everything or Nothing: The Untold Story of 007). But your documentary is the most anonymous one. Did the MGM lawyers watch over your back during the whole process or did they encourage you to do this project?

- Well we don't see this as a Bond film, it is a documentary about the effect of the Bond phenomenon upon these men in the most literal of ways. I think when people see the finished film they'll be amazed how little the 'other' James Bond is mentioned, but at the same time 'he' is hiding in the corners, in the background of every frame of the film. It is about these men first and foremost, living every day in the massive shadow of 007.

- To this point MGM and Eon have not responded to our phonecalls, we expect that will change eventually and that they're as receptive as the fans have been. 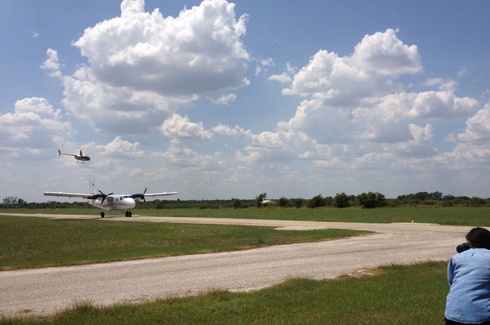 Director of Photography Kiran Chitanvis filming some of the complex aerial sequences that help give "The Other Fellow" its James Bond-sheen.

What is your plan for "The Other Fellow". Will it even hit the theaters? Any distinct plans for Sweden yet?

- Yes we definitely want the film to hit theatres. We have jokingly said that Skyfall has just made $1billion and it only has one Bond, ours has ten so we expect it to make at least $10billion. We're hoping to find a distributor and whether that is during production thanks to the current marketing push, or after some screenings at film festivals is still to be determined. But there is a certain confidence, it is an easier sell for sure than a more obscure subject. "The Other Fellow" has been accused of being an 'obscure' or 'strange' film but from my perspective its the opposite and about as commercial as a documentary gets and the style we've shot the film in is designed to reflect that.

- We didn't want to make a film related to James Bond and have it look like a grainy piece of video art, we wanted that Hollywood look and its current positioning on Youtube trailer channels alongside Michael Bay and Tom Cruise movies is exactly where we hoped it would land. Our DP Kiran Chitanvis did the most incredible job, using a Canon 5DMKIII and a microbudget to achieve that and I'm forever in her debt for the lengths she went to during the shoot. She hung out the side of helicopters, flew in planes doing nosedives, handheld from convertibles on four lane highways to get us there. Incredibly brave work, I was on the ground on a radio most of the time!

- We want the film to hit most major markets including Sweden, we don't have specific plans but if you're readers hit our facebook page at facebook.com/theotherfellow it really helps us establish that there is an audience for it there.

By coincendence, you have the same name as a british cricketer. Have you experienced the same problem like the people in your documentary?

- It's funny you say that, this idea of name-based identity has always intrigued me. I actually started a Facebook group many years ago called MBASY - the Matthew Bowyer Appreciation Society - comprised of all the Matthew Bowyer's on Facebook. It was one of the first things I did after joining the site, I was intrigued that this new thing called Facebook allowed that to happen. Looking back that was certainly a sign of things to come.

- There's a great Seinfeld joke about how if you call your son Jeeves there's a good chance he'll end up as a butler, Bozo will probably be a clown etc. The fundamental question of The Other Fellow is an extension of this, if you call your kid James Bond does he end up being a James Bond? Viewers I think will get a great deal of pleasure out of seeing how the Bond's in this film have adhered to or differed from this course.

- I have heard of the cricketer Bowyer but never really had issues with this. Having a semi-famous name is not really as impactful as its maybe just a niche group who would know you. But James Bond is perhaps the most famous name in the world, and it brings with it such huge expectations of masculinity, or a certain image.